Pay a premium and go directly to the bonus round

Bonus Buy pokies allow you to pay a premium to go directly to the bonus game. In this article, we explain how the bonus buy feature works, which are the best bonus buy slots to play from New Zealand, where to find them and why you should give them a go!

Latest games we played and recommend!

Fishn’ Frenzy Megaways will take you on the only fishing trip that can land you a catch of 10,000x your stake!

The bonus round is where you want to be as it offers the biggest chance of landing that top prize. And with the bonus buy feature, you can skip the base game and head straight for the action!

Money Train is a wild west slot with a twist that carries the winning potential of 20,000x your bet.

The bonus round is the key that leads to this grand prize and with the bonus buy option, you can head in that direction fast and surely.

And to help you land more wins, the bonus buy feature boosts the RTP to a wonderful 98% for good measure!

Money Train 2 is the sequel of the pokie by the same name which was released back in 2019. 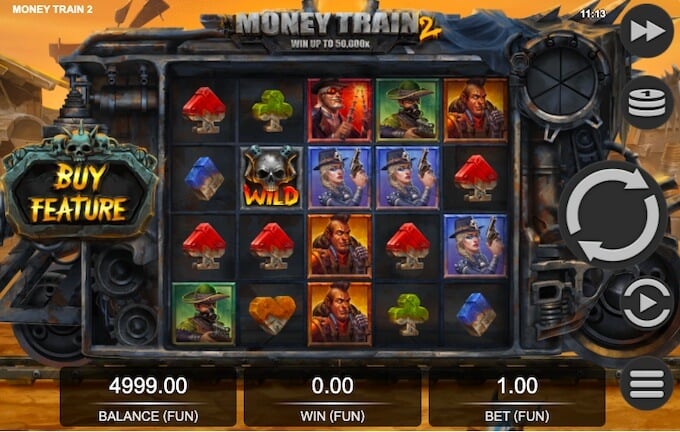 One similarity that they share is the RTP that goes up to 98% if you buy the bonus round in the slot!

Sweet Bonanza‘s most distinguishing features, apart from the bonus buy option, is the winning potential of 21,175x your bet.

And with the bonus buy feature you can get that much closer to that sweet, sweet prize, without having to go through an incessant number of spins!

Extra Chilli is a Mexican-themed slot that features the Megaways mechanic and the bonus buy option.

Unlike other similar online pokies, Extra Chilli only requires a premium of 50x your bet to access the bonus round, far cheaper than what other slots require.

Furthermore, the winning potential here is a staggering 50,000x your stake, quite worth the extra heat!

Buffalo Rising is another Blueprint Gaming slot that features both Megaways mechanics and the bonus buy.

The graphics of this game are spectacular, but what makes this game worth a spin or two is the maximum win potential of 10,000x your bet!

One of Blueprint Gaming‘s branded titles, Rick and Morty Megaways is inspired by the Cartoon Network animated series of the same name.

This pokie has 4 different free spins rounds, with the bonus buy option landing right into the Mystery Free Spins Wheel segment, which holds a combination of free spins and bonus rounds.

And to make the game even more exciting is that top prize of 50,000x your bet!

Medusa Megaways is a revamp of another slot of the same name. This new, improved version comes with both the Megaways mechanic and the bonus buy feature.

But what makes the game truly exciting is the free spins round that can be retriggered indefinitely and can apply an unlimited progressive multiplier of up to 50,000x your bet!

1 Million Megaways BC is a clever slot that will not only take you back in time 1 million years but also comes with 1 million ways to win!

Here, Iron Dog Studios, have manipulated the Megaways mechanic to offer an unexpected 1 million ways in which you could land a win!

Unlike other slots that come with a fixed premium for the bonus buy option, 1 Million Megaways BC allows you to choose your preferred price that ranges from 50x to 270x.

And the cherry on the cake is the winning potential of 45,000x your stake!

300 Shields Extreme might have a bit of a bombastic name, but the game itself comes with only one noticeable feature.

The free spins round holds all the action and is also the key to the winning potential of 17,770x your bet. And since this is a bonus buy slot, that can jump right into the battle for a piece of the prize!

Complete list of games with a bonus buy-in option

What exactly is a bonus buy pokie?

The bonus buy option allows you to skip the base game entirely and head straight for the bonus round.

With the bonus buy option, you don’t have to waste your time spinning the reels in hope that the scatter will land on the reels and take you to the bonus game.

Instead, for a price, you can skip all that and go directly to the bonus round!

How does the bonus buy feature work?

To gain access to the bonus game you need to land 3 or more scatters on the reels. With the bonus buy feature, you skip the endless reel-spinning where nothing much happens and go right where the action is.

Since nothing in life comes for free, there is a price to be paid.

Once the fee has been settled, you are sure to hit the bonus round with the next spin!

This can be quite advantageous! A slot’s bonus round offers a bigger win potential than the base game, and with the buy-in feature, you can skip hundreds of costly, yet fruitless spins and go right where you have a better chance of landing a win!

How much does it cost to buy a pokie bonus round?

The price to buy the bonus round varies from slot to slot. The lowest premium is around 50x your bet, but it can go as high as 270x your stake.

Below we compare all the fees that each one of the pokies we’ve mentioned charges for the bonus buy feature.

Big Time Gaming was the first provider to come up with a bonus buy feature. It was first included in the White Rabbit Megaways slot, way back in 2017!

Buying a bonus round – Pros and Cons

The free spins round or bonus game offers a higher winning potential than the base game. Some pokies are even programmed to give you a higher RTP, especially if the bonus buy feature has been used.

On the other hand, just like a normal bonus round, you never know if you’re going to land a win, whether small or big. There is no guarantee that any funds invested in activating the feature can be made back in full or at all!

Something else to keep in mind is the expanse! Bonus buy fees usually start around 50x your bet and climb higher, quite a substantial amount, especially if you keep using the option.

Tips on how to use the bonus buy round

The bonus buy feature is quite expensive, so you want to limit its use as much as possible.

The best time to use it is when you’ve been spinning the reels for a while without successfully triggering the bonus round once.

If you have the funds to support the expanse and you feel particularly lucky, then sure go right ahead!

Before you dive in though, remember, making constant use of the feature will eat away at your funds quicker and you have no guarantee you’ll make it up in wins.

So, set your boundaries: decide on a budget, stick to it and never chase your losses!

The providers behind the best Bonus buy Slots

Based in the UK, Blueprint Gaming has over 50 years of experience supplying land-based and online casinos with a variety of casino games.

Over the last few years, this provider has employed successfully the Megaways mechanic together with the bonus buy feature, giving us some incredible online pokies as attested by the below titles.

Big Time Gaming is an Australian developer that has given us the Megaways slots and even the bonus buy pokies.

These two features have been franchised, allowing other providers to make use of them creating an entirely new genre of pokies that are becoming more and more popular amongst players.

Below you will find some bonus buy pokies by this provider which you can try out at the best online casinos in New Zealand!

Launched only 5 years ago, Pragmatic Play is one of the fastest-growing companies in the world.

The bonus buy option is one such feature that this developer has successfully managed to incorporate in many of their most recent games, together with the Megaways set up.

For more bonus buy pokies by Pragmatic Play we invite you to check out the below titles!

What makes their games so popular with players is their innovative approach which can clearly be seen in the below titles by Relax Gaming!

One of the best-known providers in the industry, NextGen Gaming has earned a reputation for its creativity, innovation and originality.

Furthermore, NextGen games are known for their exceptional gameplay, a distinguishing feature of the below bonus buy pokies!

Part of the 1X2 network, Iron Dog Studios is a small company that has given us some big titles which you can find down below.