Hugo 2 is one of the hottest games released by Play N Go, based on the troll Hugo, a character from… 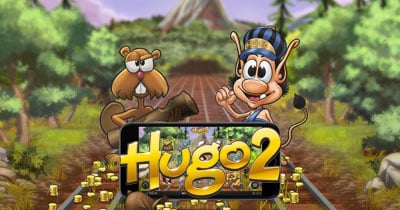 Play for free at
nzcasino.co.nz or

Hugo 2 is one of the hottest games released by Play N Go, based on the troll Hugo, a character from a popular Danish interactive TV show

Get free spins, multipliers and hit the jackpot with this game!

The maximum win can be as high as half a million dollars if you’re lucky!

The sequel to the original Hugo slot, Hugo 2 is a cute game that sets you off on a fun-filled adventure in search of treasures. If you love feature-packed pokies, then Hugo 2 may be the game for you, so hold on in there, as in our review below, we’ll tell you all about its features and let you know where to play Hugo 2 slot from New Zealand!

Where to play Hugo 2 slot with a casino bonus

If you’re located in New Zealand, then there are quite a few casinos you can join where you can play Hugo 2 as well as other online pokies by Play N Go. We recommend checking out the ones listed below in order to get a welcome bonus which you’ll be able to use on Hugo 2.

How to play Hugo 2 slot – symbols and payouts

Hugo 2 is a 5-reel slot based on the story of Hugo, a friendly troll whose mission is to recover a treasure stolen by the evil witch Afskylia. The reels are populated with quirky animations, featuring different symbols, some of which can offer huge rewards!

Hugo 2 has eleven different symbols. Eight are normal, and three are related to special features of the game. The normal symbols are the key, the whistle, a gem, a gold bar, a diamond, a mining cart, a hat, and a lever. Get 3 or 5 of them in a payline, and you’ll get a payout.

Special symbols include Hugo himself, a beaver and Afskylia. Hugo is the Wild symbol, beaver gives you free spins, and Afskylia starts a minigame if you get three of her symbols at once.

In Hugo 2, different symbols have different payouts. Those related to mining don’t pay so much. For example, the switch lever and the whistle can increase your stake by 5x, while carts and the hat will pay out 7.5x the stake.

The keys pay out 10 x the stake, while gold does it by 20x and the diamonds, the highest paying symbols in the game, will reward you with 35x.

You can bet as little as 30 cents or as high as a hundred bucks in this case. With autoplay, you can set up your bets, and how many spins you’d like to be played out. You can also set stop-limits so you won’t lose too much or decide to stop spinning after winning a big prize.

Hugo 2 has a rather high volatility, but also quite a decent hit frequency. The RTP of the game is 96.53%, which is more or less average when it comes to modern-day video slots.

So, how much can you win if you hit the game’s maximum win? In Hugo 2 Slot, you can win up to 5,000 times the money that you gambled. Normally, you can bet up to NZ$100, so you may win half a million dollars if you are lucky.

When you play Hugo 2, you will discover many features that make the gameplay so much more interesting. They include special symbols that give the player free spins and an amazing bonus minigame.

Wilds, Respins and other features

Let’s go through some of the Hugo 2 special symbols and the features they trigger,

Hugo, the main character of this pokie appears as a Wild symbol, and it can take the place of other symbols to create a winning combination.

In Hugo 2 Slot, you can win free spins whenever you get three beavers on the screen at the same time. If this happens, you will be awarded ten free spins and enter the special free spins stage.

During the free spins stage, Hugo can collect coins and sacks of money. If he gets enough of them, you can win multipliers for your prizes and even more free spins.

It’s not very hard to get awarded five more spins after your first ten. In the end, you will either stop playing or go to the bonus cave.

There is one minigame in Hugo 2, which takes you to the witch Afskylia’s cavern, which can be triggered as you play the free spins round. Here, you need to proceed to make choices to win the greatest bonus. This feature can also be triggered by landing 3 or more Afskylia symbols; 3, 4 or 5 of these symbols will give you 1, 2 or 3 lives respectively.

First, you need to choose which path to take three times. Generally, two paths will kill Hugo, and one is safe. After that, you need to use one out of three keys to open the treasure box. If you open it, your winnings are doubled, and the minigame is over.

Hugo 2 has cool cartoon graphics. The themes are generally related to mining and fantasy. The game happens on a train track in a green area, and you can visit a cave during the minigame. Compared to the previous Hugo game, its graphics are better.

The sound is somewhat generic, and it resembles an upbeat fantasy soundtrack. Hugo is a cute troll, and he says some phrases during the game when something important happens like winning the jackpot or participating in a minigame.

Play’n Go has many other slots, and some of them are similar to Hugo 2. The two obvious choices are the other Hugo games. The first Hugo and Hugo Goals (a football-themed version) are also very interesting.

Some other popular Play’n Go slots include Book of Dead, Cats and Cash, and Inferno Star.

Hugo 2 is not a popular game without reason. This highly volatile game is pretty fun, and it has several interesting features that will make players want to come back for more. There’s always something happening, and the bonus games are excellent. Why don’t you give this fun slot a try?