Age of the Gods: Apollo Power

Age of the Gods, developed by Playtech, is an Ancient Greek-themed video pokie. It’s the original slot from the developer's Age of the Gods series, and it packs quite the punch. 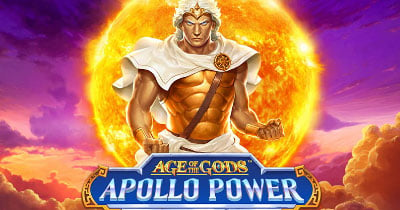 This is a medium variance pokie with an RTP of 95.02%. You can trigger a plethora of features, including four bonus games, free spins, multipliers, wilds, as well as four progressive jackpots. Make sure you read our detailed Age of the Gods slot review below before you give it a spin.

Age of the Gods Slot features

Age of the Gods is a five-reel video pokie that consists of 20 fixed paylines. To receive a payout, three or more matching symbols must land on a payline in order from left to right. The exception to this rule is the scatter symbol, which pays both ways.

The theme of this pokie revolves around various Greek gods. This is visible from the moment you enter the game. The heavenly-looking background encompasses Mount Olympus, while stunning symbols of Ancient Greek gods dominate the reels.

Finally, there’s a blue wild symbol and a scatter symbol of the slot’s logo.

Take note of the payouts in the paytable, as specific symbols can form wins together. For instance, five of a kind of Zeus and Poseidon can net you 500x your line bet, while five of a kind of the royal playing cards gives you 150x. 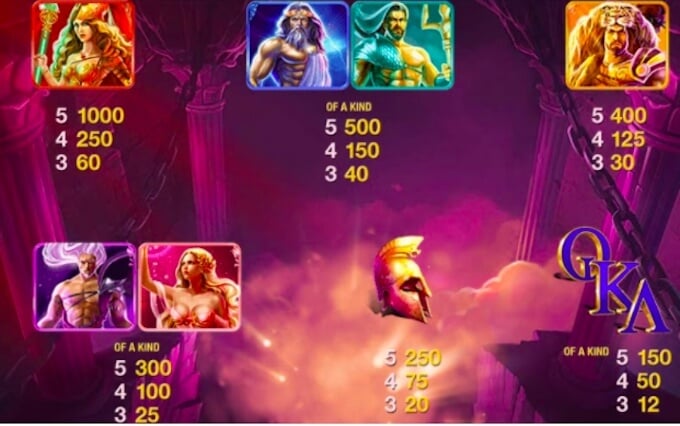 The betting range allows for wagers between NZD$0.20 and NZD$40. This works out to between NZD$0.01 and NZD$2 per line. If you prefer the reels to spin automatically, you can use the autoplay function and select up to 100 spins.

This is a medium variance pokie. It has an RTP of 95.02% and an unknown hit frequency, but a noticeable win should occur every 20 spins or so.

Age of the Gods Jackpot

Any spin, whether it’s a winning spin or not, can randomly trigger the jackpot bonus game. However, keep in mind that the bigger your bet, the higher your chances of entering the bonus game.

When you enter the bonus game, you have a guaranteed win of one of the following progressive jackpots, which seed at:

The jackpot bonus game consists of a 4×5 grid with 20 coins, each holding a hidden jackpot symbol. If you can correctly match three of the same symbols, you will win the corresponding jackpot. There’s a reaction timer in this round, so make sure you choose quickly and wisely.

Apart from the progressive jackpot, you can also trigger wilds, four different bonus games, and a special pantheon of power feature.

Wilds and other features

The blue wild symbol can substitute for all symbols, except the scatter, to create winning combinations. If you land five wilds on a payline, you can win 10,000x your line bet.

If you land all five Greek god symbols of Athena, Zeus, Poseidon, Hercules, and Aphrodite on an active payline, you win 200x your line bet.

Age of the Gods Free Spins

Three or more scatters give you entry to the bonus round. Here, you need to match three god symbols to trigger the corresponding bonus game. If you reveal Hades, the feature ends.

In this round, you receive nine free spins. Athena awards a random multiplier between 2x and 5x on every spin.

Here, the reward is nine free spins. The first spin begins with a 1x multiplier, increasing by 1x after every three spins. A locked wild sits on the third reel, awarding substitution wins.

In this round, you also earn nine free spins. Additionally, Poseidon shoots lightning and randomly turns symbols into wilds.

The graphics are vibrant and well-designed, while the symbols are detailed and full of colour. The slot comes to life through its animations, and also incorporates a dramatic soundtrack that fully immerses you into the gameplay.

Other slots to play if you like Age of the Gods

As we mentioned earlier in our Age of the Gods slot review, there are several sequels to this game. Here are some other titles in the collection you can check out:

The above sequels are linked to the same Power jackpots, yet come with different features and free spins rounds.

Age of the Gods: Conclusion

Age of the Gods was the first title from the series, and it continues to be a popular choice. It offers a wide variety of features, stunning visuals, as well as massive earning potential through its four progressive jackpots. It’s also a medium variance slot, so base game wins won’t be too hard to come by.

If you want to join the likes of Hercules and Poseidon on an epic adventure, why not try your hand at Age of the Gods?