Treasure Nile is  available at various online casinos in New Zealand for real money play as well as free play. Let’s see what this pokie has to offer in our review below. 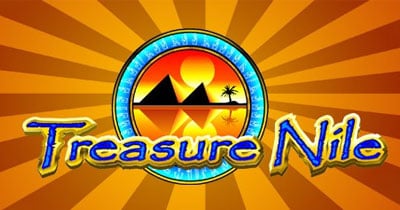 Treasure Nile is a progressive pokie designed by Microgaming. It features the popular Ancient Egyptian theme that’s made many slots soar to the top of the charts – just take a look at Book of Ra and Book of Dead. Other than the progressive jackpot, it also features wild symbols and scatter symbols, but we’ll get to that a little later in our Treasure Nile slot review.

Treasure Nile is a 5-reel video pokie with 9 adjustable pay lines. Three or more matching symbols on a pay line produce a win. You can create a winning combination from left to right as well as from right to left, which means a winning symbol must appear on either the first or fifth reel.

The payout you receive depends on the number of coins your bet per line, as the winning credit is multiplied by your coin size. Additionally, only the highest win per line pays out.

Scatter wins are added to regular wins and don’t need to appear on an enabled pay line to win.

This pokie incorporates the somewhat common theme of Ancient Egypt. However, it presents it in a fun and colourful way that is very similar to classic slot games. The grid lays on a vivid purple background, while the reels feature instantly recognisable Ancient Egyptian symbols.

There are ten regular symbols in this pokie, and none of them is in the form of a playing card, which is rather refreshing. The high paying symbols include a Pharaoh, a sphinx, a jackal, an ankh, an ornament, and a cobra. A scroll, a pillar, a sailboat, and wheat depict the low-value symbols.

You can also find a wild symbol of two pyramids, as well as a scarab, scatter symbol.

The most lucrative symbol is the Pharaoh, which gives you 6,000x your stake for five matches. On the other hand, the image of wheat only pays out 60x your bet when five matching symbols appear on a payline.

In this pokie, you can only customise the number of pay lines you want to play. There’s a fixed coin value of NZD$0.50 per line, which means you can bet up to NZD$4.50 on all nine pay lines.

Additionally, you can select the autoplay option if you prefer to sit back and watch the reels spin automatically with the bet of your choice.

Treasure Nile is a medium volatility slot, so you can expect to rack up some consistent base game wins. Additionally, it has an RTP of 92.11%, and a hit frequency of 28%.

The current value of the jackpot is visible on the game screen. On average, it pays out every four days and is often worth between NZD$50,000 and NZD$100,000.

There are no bonus games or free spins up for grabs in this pokie. Instead, it incorporates simple features that include wild symbols and scatters symbols.

Wilds and other base game features

The image of two pyramids represents the wild symbol. It can substitute any symbols, except the scatter, to produce a win. However, it can’t replace the Pharaoh symbol to trigger the progressive jackpot. The wild symbol can also form its own wins.

The scarab acts as the scatter symbol. If you land three or more scatters on a payline, you receive a payout multiplied by the total number of coins bet. Five scatters reward you with 50x your stake, while three scatters net you 5x your bet.

The graphics are simple and much like classic pokie machines, but still vibrant and full of colour. Each symbol is intricately designed to represent a specific image from the Ancient Egyptian era. The accompanying soundtrack is light and subtle, offering a relaxed atmosphere that makes it feel like you’re peacefully sailing down the Nile river.

Other slots to play if you like Treasure Nile

Here are some other pokies you can check out that feature the popular Ancient Egyptian theme:

Although this slot game doesn’t include a significant amount of features, it does incorporate the most lucrative type of reward: a progressive jackpot. It also allows regular wins to occur both ways, which massively increases your earning potential, and you’re bound to net some impressive wins along the way. The lack of betting choices may seem off-putting, but it’s common knowledge that higher stakes equal higher payouts.

If you want to try your luck on a progressive pokie, why not start with Treasure Nile?