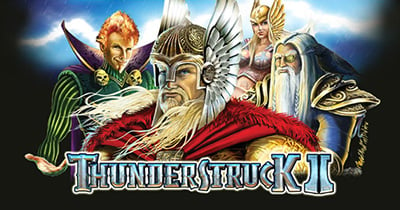 Thunderstruck II is a Norse-themed pokie from software provider Microgaming

Reach for your hammer and stand a chance to win a huge prize!

Thunderstruck II is a Norse-themed pokie game from Microgaming, and the sequel to the original Thunderstruck slot. It was released in 2010 but still remains very popular to this day.

Where to play Thunderstruck II

If you are looking for a casino where to play Thundersruck II, then you should know that there are plenty of awesome platforms that offer this game, allowing players from NZ to play it either for free or for real-money. The casinos listed below welcome Kiwi players with a bonus, which they can also use in order to play Thunderstruck II.

Thunderstruck II offers all the symbols you have come to expect from a top slot game, plus special nordic themed ones that will welcome the Nordic Gods into your home. But what makes this slot so special are its various free spins bonus games, which once unlocked, may lead to great wins!

Thunderstruck II doesn’t offer your typical slot paylines. Instead, the game has 243 fixed ways for you to win big.

You can bet a minimum of $0.30 or a maximum of $15 coins per spin as you play Thunderstruck II. The game also has an autoplay option.

The Thunderstruck II slot game offers you a theoretical RTP of 96.65%.

The maximum win for the Thunderstruck II slot game is equivalent to NZ$ 121,500 (or 8,100x the original stake) This can be obtained from each free spin during the Loki Free Spins feature or the Wildstorm feature.

Here are all the details on the game features you can expect when you play Thunderstruck II slot.

Wilds, Scatters and Other Features

The Thunderstruck II slot features are what makes this game so exciting and rewarding, and luckily, these are not just limited to the bonus games. Let’s have a look at the main base game features.

The Thunderstruck II logo activates the Wild feature which substitutes a winning combination and doubles the reward amount, making it worth as much as 6x multiplier in free spins.

If you’re lucky enough to be chosen by the gods mid-spin, the Wildstorm will appear, and Thor will arrive and turn all five of your reels into Wild symbols equalling a huge payout for you.

Three Scatter symbols trigger the Thunderstruck II free spins feature. The free spins mode comes with a multiplier, boosting your winnings x3 times. If you’re in luck to get struck with 5 Scatters, you’ll earn 15 free spins and get a x500 boost on your bet value.

If you’re lucky enough to be chosen by Thor and awarded three of Thor’s hammers, they will take you to the Great Hall of Spins, where you can enjoy a bonus round.

There are four levels of free spins to unlock. You will unlock each of them depending on the number of times you have entered the Great Hall of Spins.

The Valkyrie level is unlocked on your first visit to the Great Hall of Spins.

You get 15 free spins and a 5x multiplier on all your winnings.

The Loki bonus level is unlocked on your fifth visit to the Great Hall of Spins.

Loki wields his magic to give you 15 free spins in which he changes symbols to Wilds, further adding to your wins.

The Odin free spin level is unlocked on your tenth visit to the Great Hall of Spins.

Odin will give you 20 free spins and use his special powers to give you random 2x, 3x, or even 6x multipliers to increase your winnings.

On your fifteenth visit to the Great Hall of Spins, you will unlock the final level. The Thor free spin bonus level.

Thor himself will award you 25 free spins with rolling reels. With the rolling reels your winning symbols will be replaced by new symbols adding to your wins, Plus, you will also get 2x, 3x, 4x, and 5x multipliers on your consecutive wins.

Since 2010, Thunderstruck II has maintained its popularity thanks to its impressive graphics that evoke the Norse gods and their power.

The Norse-themed tune takes you back in time with folk-songs and war anthems of yore. The music isn’t too up-tempo or annoying, so you can enjoy your slot games while listening to music that is enjoyable too.

Other slots to play if you like Thunderstruck II

If you’re looking for slot games with a similar theme to Thunderstruck II, then look no further than Play’n Go’s Viking Runecraft, Yggdrasil’s Vikings Go Berzerk, and NetEnt’s Hall of Gods slot games. They offer a ton of Norse fun for those who enjoy Nordic-themed slot games.

Thunderstruck II has been providing its great share of excitement and wins for the last decade. Its popularity hasn’t waned thanks to its amazing special features and free spin bonuses, which come with an impressive win potential combined with a decent hit rate. We strongly suggest playing Thunderstruck II at your favourite NZ online casinos to experience this incredible game first-hand.