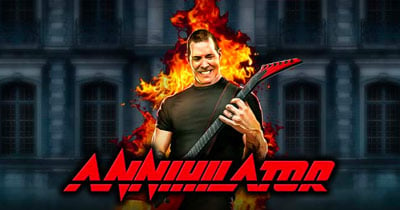 Annihilator is the latest release from software developer Play N Go. This slot is a tribute to the Canadian thrash metal band that goes by the same name and features a variety of images dedicated to its genre, including frontman Jeff Waters.

This online pokie features an RTP of 96.20% along with high volatility and is available for real money or demo play at various online casinos. If you want to discover more about this slot’s features, which include free spins, wilds, scatters, and a Fun Palace bonus game, you’ve come to the right place. Our detailed Annihilator slot review will cover all this, including where to play Annihilator online from New Zealand!

If you’re thinking of playing Annihiltaor Slot for real money, then might as well do so with a juicy welcome bonus! You can do this by joining an online casino that welcomes players from New Zealand with a deposit match offer that can be used on Play N Go slots, such as the ones we recommend below:

Annihilator is a video slot comprising 5 reels and 10 fixed paylines on a 5×3 layout. All wins pay from left to right, and only the highest win pays out per line. Additionally, you’ll need at least three matching symbols to produce a win.

This slot takes its inspiration from a Canadian thrash metal group called Annihilator. The band often portrays heavy themes of destruction and death in its songs, and this slot follows the same route. This means you’ll encounter eerie, horror-ish symbols.

There are 11 symbols in this game. The number of low-value symbols are 5, and consist of playing cards 10, J, Q, K, and A. There are also 3 high-value symbols that include a purple image of a woman carrying a doll, a red image of a guitar, and a green image of a broken mirror.

The highest paying symbol is the purple image of the woman carrying a doll, which gives you NZD$45 for five matches at the minimum bet amount. There are two symbols that pay out the least – the playing cards of 10 and J, both of which give you NZD$0.20 for five matching symbols at the minimum bet amount. If you land five wilds, you can win NZD$60.

The betting range is between NZD$0.10 and NZD$100. If you bet at the maximum amount, you’re effectively staking NZD$10 per line. On the other hand, betting the minimum means you’re wagering NZD$0.01 per line.

If you want to increase your winning potential, you should bet at the maximum amount that caters to your budget.

The Annihilator RTP is 96.20%, and it’s categorised as a high volatility slot. In essence, this means wins occur less frequently, albeit at higher amounts. You can expect to produce a win in approximately 1 in 4 spins.

This pokie doesn’t offer a progressive jackpot, but it allows a maximum win of up to 5,000x your stake during the free spins feature by landing wild symbols on the fiery reels.

There are several exciting features included in this game, in both the base game and the free spins and bonus round.

Wilds, Re-Spins, and Other Base Game Features

The base game in Annihilator slot comes with a couple of features that will ensure that you’ll rack up a couple of good wins even if you don’t make it to the bonus round. These include Wilds, the special In Command Feature as well as Respins.

The wild symbol takes the form of Jeff Waters, which can substitute any other symbols to produce a winning combination, barring the scatter and bonus symbols.

This feature triggers randomly in the base game, on random regular symbols. It expands the wild symbol to cover all of the related reels, which replaces all regular symbols, except for the scatter and bonus symbols.

If the In Command feature doesn’t trigger another feature or produce a win, you receive one re-spin. All extended wild symbols stay in place for the duration of the feature, and only the remaining reels will spin to offer new symbols. You will continuously earn re-spins until you trigger a feature or create a winning combination. Keep in mind; you can’t earn re-spins during the free spins feature.

To trigger this feature, you need to land three scatter symbols, which will earn you an initial eight free spins. This round displays an expanded wild symbol, which can replace all symbols minus the scatter. Prior to each free spin, this extended wild will move across a random number of reels and leave behind a fiery trail that turns certain symbols into wild symbols.

If a wild lands on any highlighted symbol, the entire fire trail turns wild, giving you the opportunity to win up to 5,000x your stake.

You receive 2 bonus free spins for every scatter that appears on the reels during the free spins feature, up to a maximum of 50 free spins.

The bonus game goes by the name Fun Palace and triggers when three bonus symbols land on reels two, three, and four. When this occurs, you’ll enter the Fun Palace, where you can win various prizes hidden by eerie-looking dolls.

If you choose a doll that offers a prize of 1x to 5x your stake, you receive another turn along with your winnings. If you pick a reward of 10x to 50x your bet, the feature will finish, awarding you your prize. It’s possible to activate the free spins feature in the Fun Palace as well.

The main attraction of this pokie is its inclusion of Annihilator’s top hits, which allow you to jam along to eight different songs while you spin the reels. The graphics aren’t the most modern-looking we’ve ever seen, but they still offer plenty of creepy vibes to go along with the slot’s theme.

The game also allows you to listen to music from a selected Annihilator playlist, which gives the slot some genuine extra appeal if you’re a fan of headbanging tunes.

You can try out some other rock-themed slots if you enjoy Annihilator:

This game features a dark and heavy theme, so it won’t appeal to everyone’s tastes. However, if you’re a fan of the thrash metal genre, or merely open to new experiences, you’ll quickly see it’s a game worth trying. It offers multiple exciting features, specifically its free spins, which can net you an impressive 5,000x your stake. So, if this sounds appealing, why not headbang your way to massive prizes with the Annihilator pokie?